While the model names changed, the basic working of the internal control remained the same. Usually the name changed when the pendant was given a redesign. Sometimes the main processor hardware was updated as technology improved. The software continually evolved regardless of the control name and software compatibility spanned almost all of the model names. We use the name Legacy because it covers all the models.

Finally, with the CNC MP, the pendant was redesigned and renamed to emphasize the use of multi-processors in the control

There are those who claim that their CNC is “compatible”, however, a little investigation shows that is not the case. Compatibility is a matter of percentage.

Our in-depth Legacy knowledge and experience allows our engineering team the ability to cover all the details required to provide a new control that maintains the highest percentage of compatibility in all aspects. We believe compatibility involves not just the CNC programming, but also the Operator Interface and the Service Maintenance. We address the entire process for maximum compatibility.

However, we are not identical to the Legacy in all aspects. The major difference is in performance; the NXGEN control measures typically 10x faster and 10x better than the Legacy system!

Jog operates exactly like the Legacy.  Another important feature to get right, since it is one of the most commonly used functions — especially during set-up.
To help improve the function and decrease set-up time, we have added enhancements beyond the compatible essentials.

Below is a list of familiar and new Hotkeys:

Using the menu system, several features can be accessed while still in Jog, saving time that was usually spent exiting and re-entering Jog Mode.

The following are operations which make Jog more flexible and more usable:

The Command Mode is the most fundamental requirement for true Legacy compatibility.
Starting back in the late 1970’s, the Legacy control was one of the first to offer a true microprocessor-based control using a standard keyboard interface. The first machine introduced was the VMC45. It had an E-STOP button, a Feedrate Pot and a keyboard interface. Instead of having the typical dedicated hard-wired buttons, the simplicity of a computer keyboard interface provided ease of manufacturing and flexibility for software feature updates. If you added a new feature, you simply added a new command. Over time, some basic dedicated buttons were added with the introduction of the CNC88 on the VMC40. 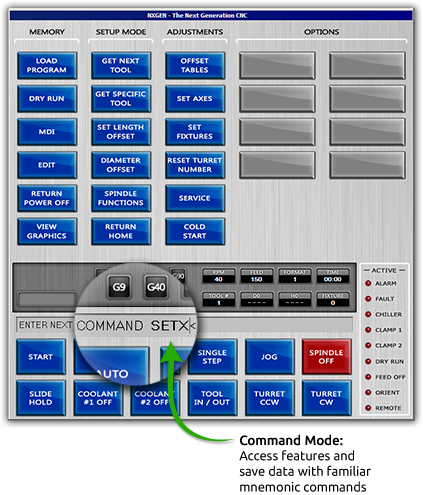 In designing the NXGEN CNC, retaining the original Enter Next Command structure has been one of our highest priorities. Our goal is for an operator that is familiar with the CNC88, CNCHS, CNCMP or the  32MP control to walk up their new control and begin using it with as little training as possible. This greatly minimizes production interruption and the operator training when upgrading to our control or purchasing a new machine using our control. The NXGEN control is truly a Next Generational Control – providing an interface with the comfort of the past and a seamless integration of the latest touchscreen technology in the industry today.

The Enter Next Command prompt is always available. Now you have the option of still using the commands or using the new “One-Touch” features, it’s your choice.

Below is a list of the familiar and new Commands:

There are many Legacy operators that use the Menus System instead of mnemonic commands such as TA,1.
With the NXGEN control,the use of the latest Touch Screen technology has allowed us to not only maintain compatibility but also greatly simplified the interface by eliminating the menu levels.
For Example, using older command menus would required three selections to input a program (MEMORY/INPUT/PROGRAM).
Now with the touch screen, it has been reduced to just one touch selection. The logic is the same, we just made it much faster and easy to use!

Our goal is to be the most Legacy program-compatible Control ever!  Simply load your program and you are ready to go.

We even support the L-word subroutines and engraving, something that many others fail to do.

The NXGEN Control is compatible with a majority of parts used in a Legacy Control.
Get yours today
Get Started Today
Loading Comments...